The kitchen, as the foundation of a new life

*Natasha is an asylum seeker in Belize who has found friends, a livelihood, and hope through cooking.  © UNHCR/Tito Herrera

For many refugees and displaced people in the Americas and the Caribbean, food represents a way to hold onto their origins and share with their host communities. In From Our Table to Yours: Fusion Cuisine

For Natasha*, cooking has always been a favorite hobby. But one day, that pastime turned into her livelihood after she was forced to flee her native El Salvador to Belize, following threats from gang members.

Natasha, 39, learned to cook as a child, alongside her mother. She continued the enjoyable tradition with her own daughter, until three years ago when the two of them were forced to flee. "The gang members harassed me and my daughter…  They wanted [her] to join," Natasha explains, adding that the gang resorted to creative techniques to terrorize mother and daughter.  "They even walked on our roof to scare us."

Mother and daughter endured in a constant state of fear until a tragedy hit far too close to home: They learned that a friend's daughter had been kidnapped and killed by a neighborhood gang. It was then that Natasha knew they had no choice but to leave their country, and the two fled with little more than what they could carry in a backpack.

In Belize, Natasha tried to find work as a clerk in a clothing store – a job she had held for years back in El Salvador – but she had no luck.  Worried about how she was going to support her daughter, Natasha decided to put the culinary skills she had learned alongside her mother to use and cook for a living.

"I've been fortunate to have found many friends here who have taught me Belizean recipes," says Natasha, who now sells local dishes with a Salvadoran twist, including the most typical Belizean specialty, Rice and Beans.

Her recipe, "chicken with rice and beans", can be found in From Our Table to Yours: Fusion Cooking, a new cookbook published by UNHCR, the UN Refugee Agency, that is available for free download. This dish combines the most emblematic Belizean dish with the seasoned chicken and vegetables that are eaten in El Salvador.

Natasha hopes she and her daughter, now age 16, will be recognized as refugees in Belize so that they can rebuild their lives in peace. "What I love most about Belize is the peace and security that my daughter and I can enjoy here. We walk freely without fear."

Food can be a powerful tool for integration, as it was for Natasha and the 13 other displaced people who have shared their recipes in the Fusion Cuisine cookbook.  But for many people who have had to flee, food is also something of constant concern. According to a recent survey by UNHCR, 48 percent of refugees in the Americas report eating only twice a day, while 6 percent of respondents eat only one meal a day.

It was precisely hunger, as well as difficulties in accessing much-needed medicine that pushed Alfredo, 68, to leave Venezuela. For this retired teacher, his monthly pension did not cover even his most basic food needs: The entire pension was enough to buy only a few kilos of rice or a half dozen eggs. Alfredo realized he had no choice but to flee, and a few years ago, he set out for Chile, where his daughter and grandchildren were waiting for him.

Although in many ways he managed to adapt well to his new life in the Chilean capital, Santiago, he found it very difficult to find a steady job. "For many months, I knocked on many doors but there was always some reason not to hire me," he recalls, "because I wasn't young, because I didn't have the right visa, because they believed I didn’t have the strength and many other reasons. I couldn't get a job, and it was very frustrating." This is a challenge faced by many older people who have been forced to start over from scratch in a new country. The outbreak of the coronavirus pandemic only made the situation worse.

However, Alfredo is not one to stand idly by. In the midst of the pandemic, he heard that the local parish was looking for volunteers for the soup kitchen, to help prepare hot meals for those in need. He began to volunteer and in the soup kitchen, he not only learned to make many Chilean dishes – such as Italian squash, charquicán, and potato cake – but has also shared a host of Venezuelan recipes.

“This dish has so many meanings for me – it means Venezuela. When I was a child and they cooked this dish in my house, it made me happy. Today I smell it and I remember that happiness”, explains Alfredo while he cuts, whisks, and fires off jokes in the kitchen.

Each Fusion Cuisine recipe is a mixture of flavors and sensations that combine to represent both displaced people’s host countries and their countries of origin. UNHCR invites you to cook with refugees and share your recipes.

*Names have been changed for protection reasons.

VIDEO: Natasha shares how to make Belizean rice and beans in a step-by-step video. The complete recipe is available in From our table to yours: Fusion Cuisine. 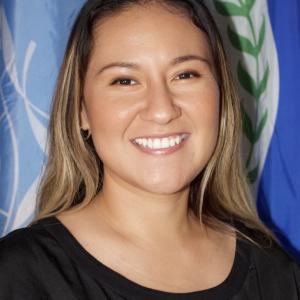